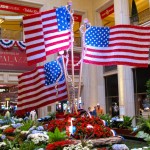 Las Vegas celebrates the fourth of July with its own unique style.  When I moved here ten years ago, I quickly discovered that the fireworks in this town are some of the best I've seen for the July 4th holiday.  While San Francisco does a beautiful show over the bay, it's all centralized in the one spot.  The show in Vegas is all over town. This year's fireworks will include the Northwest, with the master planned community of Providence hiring Pyrotecnico to do a 16 minute display to shows at Mission Hills Park in Henderson.  Other shows will be at the Station Casinos throughout the valley.  One of the reasons I find the fireworks in Las Vegas so spectacular is that they are spread all over town.  In addition to the shows that are planned by the various communities and casinos, you can expect to see some stunning fireworks from locals who are celebrating with them.  From our location near the foothills in the Northwest part of the valley, we see them going off all around us.  Starting with Summerlin, to the Providence Community, to Aliante Station in the North to the Strip Hotels and even small flashes from the ones in Henderson.  And, unlike New Year's, these start earlier and last longer.  Plus it's warm enough to stay outside and watch them which makes the Fourth of July one of our favorite holidays to spend in Las Vegas. 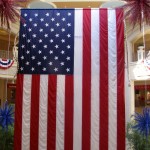 In addition to the fireworks, there are some beautiful displays at the Casinos.  We had a chance to visit the conservatory at the Bellagio on Memorial Day.  They have created another Fourth of July spectacular in their conservatory.  For the Fourth of July, we paid a visit to the Venetian and Palazzo where we found a beautiful display that includes the largest flag I  believe I've ever seen.  It hangs from the ceiling of the atrium to just over the first floor.  You can view the video here below.  Las Vegas celebrates the fourth of July with a unique style.