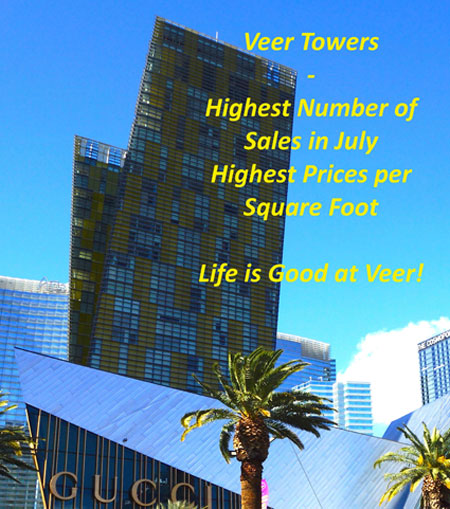 We continue to see a large selection of high rise condos available in Las Vegas finest buildings.  There are 521 luxury condos currently listed for sale.  That's the third month of a steady decline.  It was 531 last month and 534 the month before.

Bargain prices can still be found.  At Allure there are six units listed for less than $200/sf.  Turnberry Place, Tower 1 has a 2050 sf unit listed for $200/sf.  These are the same units mentioned in last month's high rise update.

We sold 51 high rise condos in our most luxurious buildings in July.  This is similar to the 50 we closed in June and in line with the average of 51 per month over the past year.

Veer Towers lead the pack with 10 condos that sold in July.  Veer also lead with highest prices per square foot.  Close behind Veer Towers was MGM Signature with 8 units sold.  MGM Signature continues to attract investors who appreciate the bargain prices.  MGM 1 bedroom units sold in the low to mid 200s.  MGM studio units closed between $124K and $170K.  The Martin had 7 condos that changed hands in July.  Palms Place and The Ogden followed with 5 units each.

The 521 condos currently listed for sale would last 10.2 months if no new units came on the market.  More than six months is a market that favors buyers.  It's still an improvement over a couple of years ago when we had a 3 year supply.

Highest Prices Paid - We reported several multi-million transactions in previous months.  Only one condo sold for more than $1 Million in July.  Unit 202 at ONE Queensridge Place Bldg 2 was listed for $1.85M and sold for $1.75M after 90 days on the market.  The 3 bed, 4 bath residence offered 3856 sf of luxurious living.

The average high rise condo that sold in July took 95.4 days to sell.  We still have some that get picked up quick.  17 of the condos that sold last month went into escrow in 30 days or less.  Twenty-seven or more than half of the condos that sold in July sold in less than 60 days.  The condo that sat on the market the longest time was also the one that fetched the lowest price per square foot.  Condo 2304 in Tower 1 at Turnberry Place with list price of $420K was listed 416 days before closing for $375K.

Cash was used in 35 of the purchases.  Conventional loans financed 13 of the deals.  The Ogden, Turnberry Towers and Veer Towers where the developers have established relationships with preferred lenders.  We're seeing more financing in resale units. Financing was used at Newport Lofts, Turnberry Place, Metropolis and ONE Queensridge Place.  Having more financing available should help the high rise market where many buyers are locked out without financing.