Today's buyers have 480 high rise condos to choose from in our most popular buildings.  Over the past year we sold 537 in those same buildings.  In January we only closed on 35 high rise condos.  That's a drop from the 55 that we closed in December 2014.  While this is a drop from December, in January of 2014 we only closed 32.  It appears the slight drop is seasonal.

The good news for owners - the 537 we sold over the past twelve months brings the current inventory down to less than an 11 month supply of high rise condos.  The high rise market still favors buyers but the market is gradually absorbing the inventory.  If you've been sitting on the fence, you are not likely to see a better time to buy than the current market. 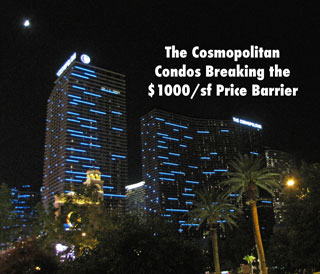 Search the high rise condos listed in the MLS and you only find six are listed as short sales.  There are four foreclosures listed.  The foreclosures includes a $2.699M residence at ONE Queensridge Place.  The 5114 sf luxury condo originally sold for $3.675M in 2007.  Bargain hunters looking to buy into the high rise market for less than $200K have 45 options.  Most of them are studio units at MGM Signature and Palms Place.  There are two residential units at Allure priced less than $200K.  One is a 662 sf studio on the 36th floor for $190K.  A 3rd floor, 999 sf 1 bedroom on the 3rd floor is listed at $185K.

Veer Towers took the price for most closings with 8 units sold in January.  The Cosmopolitan had the highest price per square foot.  The Mandarin had the two most expensive deals.  Two penthouse suites at The Mandarin closed for more than $2M.  The Mandarin Oriental continues to establish itself as the luxury high rise condo in Las Vegas.

While the total number of luxury condos sold in January may not have been huge, the prices were good.  In fact, six of them closed for more than $1 Million.  Four of the condos sold for more than $700/sf.  Two were at The Mandarin Oriental.  Units 2605 and 3308 went for $750 and $749 per square foot.

How Many Days On The Market?

Three of the traditional sales closed with less than 30 days on the market.  Ten of the high rise condos that sold were "developer" units that had not been sold before.  Developer units are still available in some buildings.  The Mandarin Oriental, Veer Towers, ONE Queensridge Place, Turnberry Towers, Palms Place and The Ogden have them.

The typical high rise condos are remaining on the market longer than 30 days.  Six of the units sold in January were listed more than 180 days and one of the units was listed for more than a year.

Cash continues to rule the high rise market.  Twenty seven of the 35 condos sold in January were purchased with cash.  That included four of the most expensive, $1 Million plus luxury high rise condos.