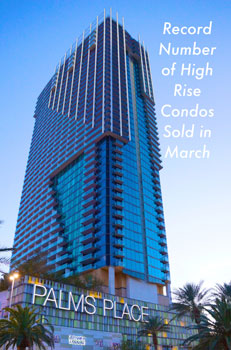 Buyers in the market for a high rise in one of Las Vegas' top buildings have 505 options to choose from.  Fewer than the 516 we had last month but more than the 480 condos listed in January.  In April of 2014 there were only 446 high rise listings for sale.  We sold 78 high rise condos in March.  That's the highest number sold per month in a couple of years. Palms Place had 33 closings.  That still leaves 45 transactions in all the other buildings.  Not a bad month for Las Vegas High Rise condo owners.  In March 2014, we sold 40 high rise condos.

A search of the high rise condos listed for sale in the MLS shows that 8 are short sales.  Only 3 of the current listings are foreclosures.  The most luxurious foreclosure available this month is at Panorama Towers.  Unit 1512 in Tower 1 is an end unit that offers both Strip and Mountain views.  The 2189 sf residence offers 2 bedrooms, 2.5 baths and parking for 2 cars.  List Price - $662,900.  The previous owner paid $1.25M when they bought it in 2007.  It's a great deal for some lucky buyer.

The lowest price recorded in March was a studio for $160K at MGM Signature.  29 condos closed for less than $200K in March.  The majority (26 condos) were studio units at Palms Place.  The lowest price paid for a residential high rise condo was unit 3712 at Allure.  This one bed, 2.5 bath condo was listed for $199K and sold for $205K.  It was a short sale.

Lowest Price per square foot - three of the condos sold for less than $200/sf.  Unit 301 at Turnberry Place Tower 4 was only $166/sf.  That one was the foreclosure and in the closing notes, it stated the condition was "Fair".  The appliances seemed to be there in the photos but the previous owner never got around to putting in flooring or painting the unit.  Unit 406 at Metropolis came in at $181/sf.  Unit 103 at Panorama Towers is not technically a high rise, but one of the townhome style units by the community pool.  That one sold for $196/sf. 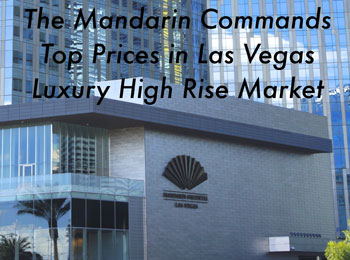 Days On Market - 49 of the units sold last month went into contract with less than 30 days on the market.  This is partially skewed by the number of developer units that sold at Palms Place, Veer Towers, the Mandarin and the Ogden.  The developer units usually don't get entered into the MLS until they are about to go into contract.  Excluding the developer units, the average high rise condo is staying on the market 98 days.  Several of the units that sold last month were listed for more than a year.

Financing - Cash continues to rule the high rise market with 58 of the units sold purchased with cash.  This includes six of the most expensive $1M plus condos sold.  14 of the purchases involved conventional loans.  Alternative financing was used in six of the deals.