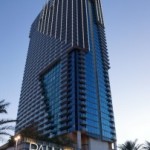 We're starting this month with 448 high rise condos in our top buildings available in the MLS.  The number of condos sold in July jumped back up to 50 in the buildings we follow.  Better than the slight dip to 39 we had last month.  At that rate of sales, we still have a nine month supply of high rise condos listed for sale.

Nine of the condos sold in July went for more than $400/sf.  The buildings getting the highest prices included Mandarin Oriental and Veer Towers.  Turnberry Towers, ONE Queensridge, Panorama Towers and Palms Place each had a condo that sold for the $400/sf plus range.  Most expensive prices continue to be found at the Mandarin where three condos sold for more than $600/sf.

The Wall Street Journal has reported that Homebuilders are Venturing Into Urban Areas.  We haven't seen signs of the major builders entering the high rise market in Las Vegas yet.  We probably won't see builders start more local high rise projects until we've depleted the current high rise inventory.  It's a trend that may spread to this market if it does well in other areas.

Owners at Trump Towers may be getting a new neighbor.  The Review Journal reports that Crown Resorts from Australia is purchasing the parcel of land where the New Frontier once stood.  No details on the plans for the new Casino or when they'll break ground.  Sales at Trump have been slow over the past several months.  In fact, no units were sold at Trump in July.

Panorama Towers had the highest number of condos sold in July.  There were 11 transactions in the two towers, including one of the townhome/cabana style homes by the pool.  Other communities with high sales activity included MGM Signature and Palms Place with seven closings each.  Turnberry Towers also had a busy month with six transactions.

Out of the current listings, only seven are short sales. Only three are foreclosures.  A Total of ten distressed listings.  You can still find a few one bedroom condos for less than $200K.  There are two at Allure and one at Panorama Towers.  All three of those well priced condos are traditional sales, not distressed.  There is still a good selection of studio units available at MGM Signature and Palms Place for less than $200K.

What Sold in July? 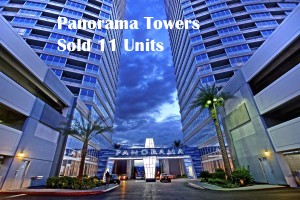 The number of condos that have gone into contract has increased slightly.  We're now at 71 compared to 67 last month.  Short sales make up 28 of the ones under contract.  Two of them are foreclosures.  The 43 traditional and REO contracts should be closing within the next 30-45 days.  If a few of the short sales get to the closing table, the number of units sold next month should be a healthy number.

CASH Deals continue to be the norm in the high rise market.  39 of the condos sold in July were bought with cash.  Conventional loans were used in 8 of the closings.  Owner Will Carry and Contracts of Sale financed the remaining three.