Today's high rise buyers have 495 options available.  Down slightly from the 521 units listed last month.  And the fourth month with a decline in high rise condos listed for sale.  It's still higher than the 424 high rise listings from a year ago.

Three of the current listings are short sales.  Six of them are foreclosures.  Lowest priced foreclosure continues to be unit 2319 at Palms Place.  This studio unit has been listed for 215 days with an original starting price of $199,000.  The price dropped to $155K yesterday.  Highest priced foreclosure is unit 803 at Metropolis.  The 2732 sf unit features 2 beds and 2 baths in 2 stories for $467K. 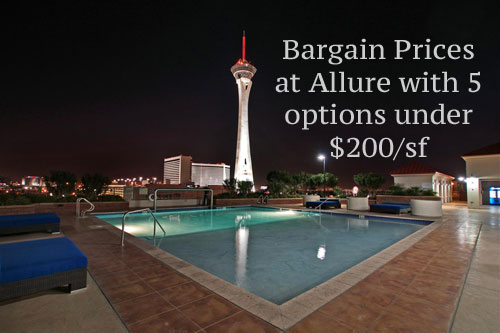 Where are the bargains?  Lowest prices per square foot continue to be found at Allure.  Five Allure condos are listed at less than $200/sf.  Turnberry Place, Metropolis and SOHO Lofts each have one condo priced less than $200/sf.  The bargain at Metropolis is the foreclosed property.  It came on the market 27 days ago.  The other low prices have been listed at least two months.

Lowest price per square foot is the 2732 sf condo at Metropolis.  It features hardwood floors, granite counters and stainless appliances.  Views are of the Wynn golf course and Strip.

What SOLD in August?

Where are High Rise Condos Selling?

How Long Will It Take to Sell Your High Rise Condo?

Only ten of the high rise condos sold last month went into contract in 30 days or less.  Three of those were developer units at Palms Place and Veer Towers.  The average days on the market for the condos sold in August jumped to 137.  The penthouse at ONE Queensridge Place was on the market 618 days before accepting an offer.  Twenty one of the condos that sold were listed for 90 days or more.

Cash was used in 26 of the August transactions.  Conventional mortgages were used in 11 deals.  Two were sold with OWC or private financing.