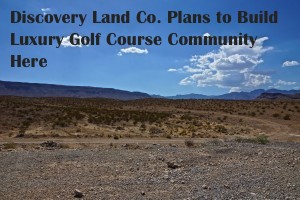 Discovery Land Company announced plans to build a Golf Course community South of the Ridges in Summerlin.  The new community will feature homes on 1-3 acre lots, a private golf course and services equal to what you would find at a luxury resort.  Ground breaking is scheduled for 2015 with the community slated to open in 2016.  Prices and the name of the new community haven't been set.  The Review Journal reports that lots will be starting at 7 figures.  Everyone expects that this new community will be the "Ridges on Steroids".  The 1-3 acre lot size will be an advantage.  It's hard to top the views and stunning homes in the Ridges.  We'll see if they can.

Cadence, a New Master Planned Community in Henderson is beginning to take shape. Signs are now up on Lake Mead Pkwy at Mojave. Land prep has started. Builders are signing on. This development that will benefit the neighbors. Nearby Tuscany has long been one of our favorite affordable golf course communities. One drawback at Tuscany has been the lack of shopping, dining and entertainment nearby. The new homes being built at Cadence will help support new shops and restaurants that owners at Tuscany get to enjoy as well.

We have 6889 single family homes available for sale in the MLS.  Condos and town homes offer another 2351 options. Total homes for sale today is 9240.  This is another month with a slight increase in homes for sale over the last month.  In June we were at 9040.  In May we had 8717 listings.

Compared to a Year Ago  - The number of homes sold in June, 2013 was higher with 3497 closings compared to 3275 closings in June 2014. It's a lower number than last year. Considering that prices are higher, it's still within a healthy range.

The increase in homes purchased with mortgages represents a market shift. We are seeing traditional move up and first time buyers coming back into the market as cash investors pull back.

If your home isn't getting offers after months on the market, you should read "Sell Your Home in 30 Days or Less". 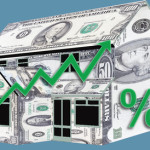 We now have 9240 homes listed for sale. We sold 3275 in June. That translates into 2.8 months of inventory if no new listings came on the market. It's up from a 1.5 month supply in July of last year. We're still in a seller's market and will be until we're closer to a six month supply of inventory. At today's rate of sales, that would require about 19,650 homes for sale. So, when you see all the homes that are listed for sale, don't assume you can drag your heels because there are "so many homes available". 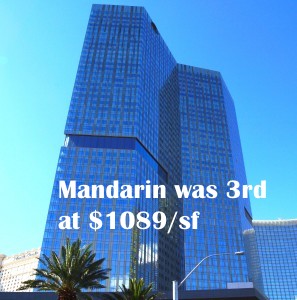 Unit 4705 at The Mandarin Oriental took the third place for over-all price. The $1089/square foot was the highest price per square foot. This penthouse offered 2 bedrooms, 3 baths and a den in 2755 sf of high rise luxury.  It was listed for $3.85M and sold for $3M on June 12th after 49 days on the market.

The Las Vegas Real Estate Market is a monthly update. It covers homes sold in Las Vegas and Henderson with latest news and market trends.