A lot of people are in the market for a new home, and that means finding a home to fit your own individual lifestyle needs. While some people seek out a home with a private swimming pool and outdoor living space, others are more interested in storage space or even the added benefits of a mother in-law suite.

An EV can really put a strain on a home’s electrical system, and that’s especially the case if the system is underpowered or if it’s an older system. Because it’s most convenient to do a long charge at home, knowing the capability of a home’s system becomes extremely important.

Even if you don’t currently own an electric vehicle yourself, there’s a chance you could own one in the future. Electric vehicles currently make up a small number of new vehicle sales, but that’s expected to change in the coming years, as more auto manufacturers deliver EVs to the market, and charging stations become more prevalent.

As for home charging stations, most people tend to stay in a home for a while, so it only makes sense to find a home capable of charging an electric vehicle. The State of California mandates wiring for EV charges in new construction homes, but some new homebuilders in other states are taking it upon themselves.

It’s similar to the trend of hardwiring new homes for cable television, except this time the homes are being wired for electric vehicles. As electric vehicles become more and more popular, so will the need for home EV chargers. 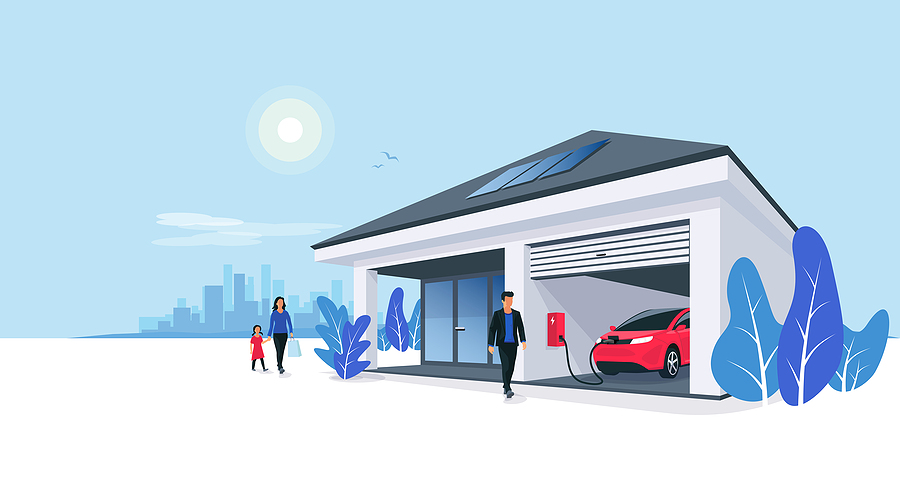 Basic wiring in a single-family home garage typically costs between $500 and $1,500. That doesn’t account for the charging station, which could tack on another $400 or even up to another $2,000.

The costs vary depending on location. A 240-volt hookup can usually charge between 20 to 60 miles per hour.

Some condo buildings already come with EV plug-ins. The feature, of course, varies by property, and sometimes varies in popularity depending on the home’s price point.

It stands to reason that many other states and cities will soon catch up with California and the number of EV vehicles already in that state. An estimated 12 out of every 1,000 Californians currently owns an electric vehicle. California may lead the nation right now, but other states will likely start catching up, especially as more private homes and public spaces start including EV chargers.

There are plenty of benefits tied to homeownership, and one specific type of home loan makes it even easier for some prospective Nevada homebuyers ...Read More

What to Consider When Buying an Equestrian Property

While some people are looking for neighborhoods packed with amenities, others are searching for homes and properties with more privacy, which may ...Read More

Benefits to Owning a Home with RV & Boat Parking

People are attracted to certain homes and properties for specific reasons. A good location and a desirable floorplan are one thing, but some of us ...Read More